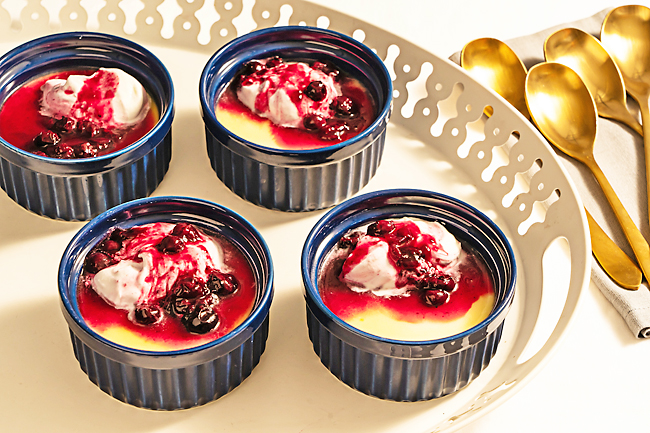 THE WASHINGTON POST – A light, zesty lemon pudding is a delicious coda for any meal, but with a quick blueberry whipped cream it turns into a truly festive dessert. Prepare the pudding and blueberry compote and place in the refrigerator to cool.

Since the pudding has to be prepared a few hours before serving, it’s an ideal last course for a dinner party so you can focus on your guests and enjoy their company. Prepare the whipped cream a few minutes before dessert, stir in some blueberry compote, spread on top and serve.

Make Ahead: The pudding and blueberry compote must be prepared and refrigerated at least four hours before serving.

FOR THE LEMON PUDDING

Three quarters of a cup of granulated sugar

Half a teaspoon of kosher salt

Two and a half cups of whole milk

FOR THE BLUEBERRY TOPPINGS

A quarter cup plus a teaspoon

A quarter cup of water

A cup of fresh blueberries

A quarter of a teaspoon of kosher salt

A cup of cream

Prepare lemon pudding: finely grate the lemons with a grater; You should get two to two and a half tablespoons. Juice the lemons to get a quarter cup of juice and set aside (if you have leftover lemons / juice, save for another use).

In a medium-sized saucepan with a heavy bottom, mix the lemon zest with the sugar and rub together with your fingertips for about 30 seconds until they are fragrant. Stir in corn starch and salt, then slowly stir in the milk.

Set the saucepan on medium to high heat, beating constantly. The mass should begin to thicken just before cooking. Once it does, cook a minute or two until it’s thick enough to cover the back of a spoon, then take it off the heat.

In a large measuring cup (this makes it easier to pour into the casserole molds later) or a medium-sized heat-resistant bowl with a kitchen towel underneath, whisk the yolks to dissolve them. With a ladle in one and a whisk in the other, slowly drizzle the hot milk mixture into the eggs, stirring constantly. Gradually work in about half of the milk mixture, then add the egg yolk mixture to the saucepan and stir. Slowly stir in the lemon juice and butter until the butter has melted and the mixture is even.

Strain the pudding back into the measuring cup through a fine-mesh sieve and press onto the solid with a rubber spatula. Divide the pudding evenly between four 8-ounce casserole dishes or coffee cups (each dish should contain about three-quarters of a cup of pudding) and cover each with small saucers. Chill for at least four hours and up to a day.

Prepare the blueberry toppings: While the pudding is cooling, mix a quarter cup of sugar with the water in a small saucepan over high heat and heat, stirring, until the sugar has dissolved.

Add the blueberries, lemon juice and salt and bring to the boil. Reduce the heat to low and simmer the mixture, stirring with a heat-resistant rubber spatula, until the blueberries pop and the mixture thickens to a jelly-like consistency, five to seven minutes. Remove from heat, let cool for a few minutes, then scrape into a small bowl. Cover and chill for at least four hours and up to a day.

When ready to serve, in a medium bowl, use a hand mixer on medium speed or a whisk to whip the cream with the remaining 1 teaspoon of sugar until soft peaks form, then gradually increase the speed to high, about two to three minutes for the hand mixer. When the whisk is lifted out of the cream, it should form soft tips with sloping tips. Pour in half of the blueberry compote and carefully toss with a rubber spatula and fold into blue stripes.

Take the puddings out of the refrigerator and brush each with a dollop of blueberry whipped cream, followed by dollop of the remaining blueberry compote and serve.