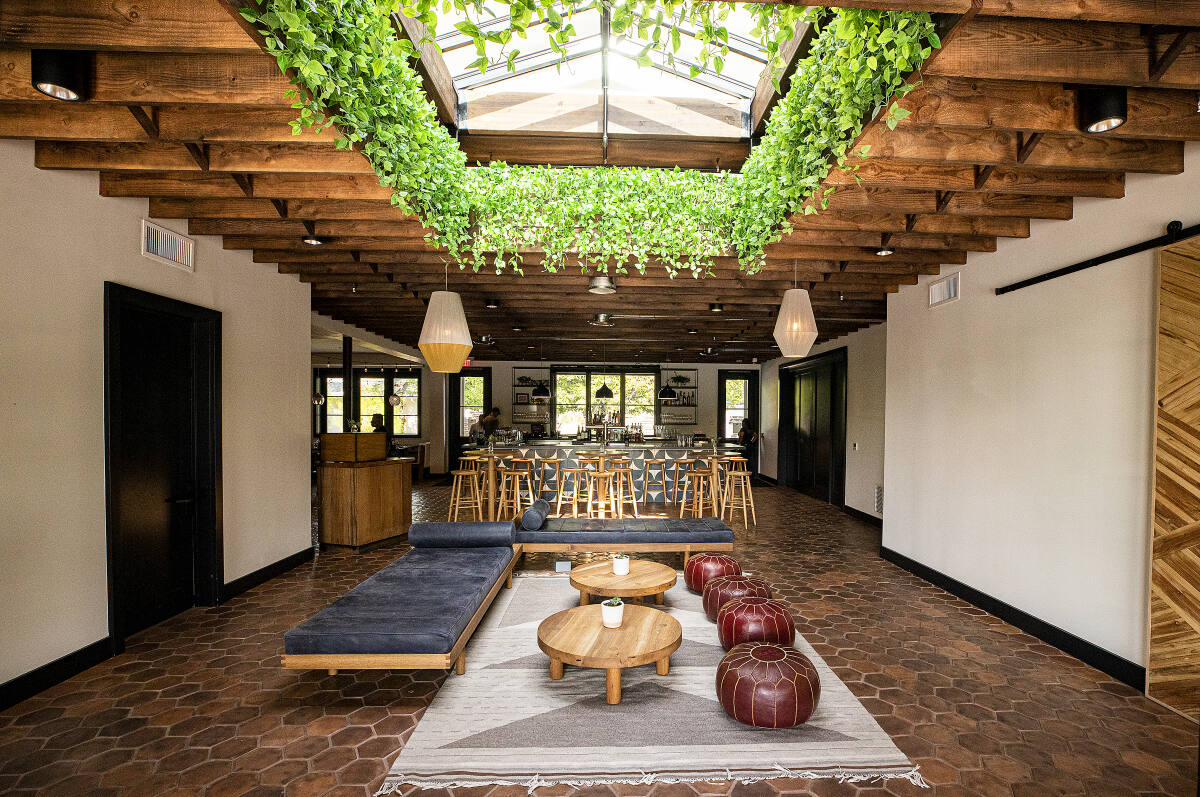 Calistoga has always been a charming little town (albeit historically sleepy), home to old-fashioned attractions like a mini-version of Yellowstone’s Old Faithful Geyser, 19th-century mud baths, and mineral springs.

But gradual gentrification is underway with new inns, spas, resorts, and restaurants, a trend that began with the opening of the French New Orleans-style Evangeline bistro in 2014, followed by Sam’s Social Club, Lovina, and House of Better , among other things. The newest entrant is the Fleetwood Restaurant at Calistoga Motor Lodge and Spa on Lincoln Avenue on Silverado Trail.

Formerly Sunburst Calistoga, the aging place wasn’t much to see. The long, low motel looked like an army barracks, if pretty, with a pool and hot tub in the back. New owners arrived in 2017 and began a major renovation that modernized the retro-chic rooms, adding the European bathhouse-style Moonacre Spa and an excellent new restaurant.

The Italian concept involves a brand new building spanning two floors, adding that much-needed architectural flair. It’s a chic place now, from its boards, Moroccan-style pendant lights, central bar, and tree-lined, dog-friendly courtyard with a fire pit and hammocks to the side. It’s pretty but relaxed, in keeping with the casual but skillfully prepared food from Chef Drew Glassell of Cyrus, Market, Jardiniere, Gary Danko and most recently Douglas Keane’s former Roadhouse 29 in St. Helena.

General Manager Neil Robinson is also a restaurant veteran who has worked at Lark Creek Restaurant Group, Belcampo Meat Company in Larkspur, and most recently at Glassell at Roadhouse 29. The result is a well-trained team that knows their menu down to the last ingredient and pays attention to the little things like whether we want lemon or lime with our water and then delivering the fruit wedges in a separate bowl.

Wood fire cooking has become fashionable over the past decade, especially in Wine Country, and I hope it always stays that way. The wood gives a fragrant, smoky nuance that adds new interest to the simplest of vegetables, fish, and meats without adding the charcoal tone that I usually find too harsh. The dry heat of a wood fire caramelizes the proteins in the meat and increases the sugar in the vegetables. Technology sparks the chefs’ creativity when they choose less expected things to burn, such as fruit.

Roadhouse 29, Glassell’s former hangout, was built around a grill, with food smoked over California oak and cabernet staves from Freemark Abbey (the restaurant was on the winery). At Fleetwood, Glassell works with two wood-burning stoves housed in a dramatic black tile wall in the open kitchen. Just past the lobby, you’ll see a stack of oak logs waiting in the hallway.

The domed top ovens also make good piadini, thin Italian flatbreads, which are usually a bit delicate and served folded. I was expecting an appetizer, but it was easily big enough for a main course flavored with large chunks of smoky grilled chicken, mozzarella, buttered garlic cream, toasted red onions, and a salad worth arugula in a snowfall of grated parmigiano ($ 16) .

The heat of the hardwood also makes for raised fried meatballs. The five balls are dense and a little tough, almost like a sausage sprinkled with shredded herbs. My waiter explained that it was half pork and half beef tied with ground pork rind instead of breadcrumbs to make them gluten free.

“The chef makes little parmesan hats,” my waiter said over the pointy, crispy rounds on the meatballs. And there’s a pleasant hint of nutmeg in the thick tomato sauce ($ 14).

The kitchen’s red-hot grills also offer a variety of delicious treats, including giant U10 shrimp in the cocktail starter with pickled cucumber, watermelon radish, and flavorful Calabrian chili sauce ($ 16); and lightly charred hearts of Romaine topped off with salty caper berries, anchovies, shaved parmesan, and Caesar dressing ($ 15). A rectangular burrata display is spliced ​​with watercress, pickled onions, and grilled country bread, plus juicy grilled peaches for a sweet accent ($ 16).

Fleetwood’s $ 28 salmon grilled on oak is on point, firmly cooked but still moist and pink inside and topped with warm artichokes, arugula, and cherry tomatoes ($ 28). The clean, hot-burning oak is mild enough not to drown out delicate aromas.

I remember the first time I ate grilled corn on the cob – elote on a malecon in Puerto Vallarta decades ago – and I’ve never eaten it cooked since. When I visited, Fleetwood’s Kitchen offered it as a daily side dish ($ 7). It remains one of the most delicious things in the world – charred so that the plump, roasted kernels release sweet juice when you gnaw. They sparkle with fiery spices from Calabrian chilli oil, Glassell’s most popular homemade seasonal seasoning.

The same barbecue treatment made the humble Jimmy Nardello peppers a star.

Of course, not everything is fired with wood. The chef makes premium spinach and ricotta agnolotti, the thin, silky pouches spread over withered spinach and draped in tomato, basil and garlic sauce with parmigiano ($ 16).

Both Glassell and Robinson are cucumber fans, a love they discovered while working at Roadhouse 29 (“We can talk about them for hours,” said Robinson. “We’ll pickle whatever we can think of – can we pickle bananas?” ).

The daily side dishes often contain fermented products, such as a nice mix of crispy sweet and sour ramps, green beans, carrots, green strawberries, whole Calabrian chillies and cucumber. You can also find pickles as a cake topping in some craft cocktails.

Glassell isn’t done with the flames yet. One of the fluffiest polenta cakes I’ve ever tasted is covered in moist zabaglione and almond and amaretti crumbs that rest on a syrupy pond of oak-roasted strawberries ($ 12).

So is the new Fleetwood a destination restaurant? Yes it is. You could even say it’s worth getting excited about.

Carey Sweet is a Sebastopol-based food and restaurant writer. Read their restaurant reviews every other week in Sonoma Life. Contact them at carey@careysweet.com.