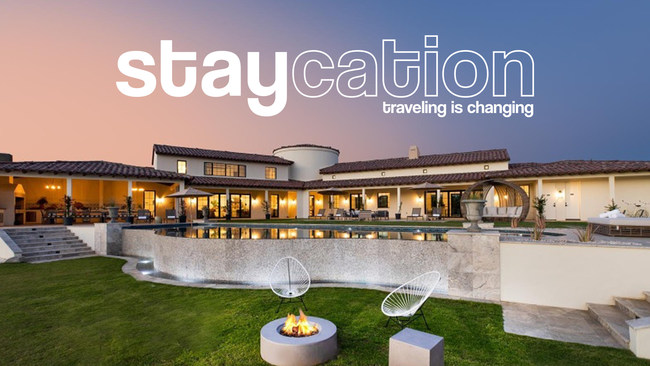 “Staycation” takes viewers to some of the most luxurious rental apartments in the world. (PRNewsfoto / Making It Media)

Making It Media senses a change in consumer travel behavior and content consumption and is redefining the travel genre with a new class of travel destination-themed content. The company is focused on reaching consumers on streaming platforms, social media, and local and national television networks with a genre of travel content that offers a virtual getaway, as well as highlighting local hotspots that are an alternative to traditional vacation.

“Making it Media creates the travel channel of the future. To help people discover new places and people and to present all facets of life like never before,” said Robert Parks-Valletta, CEO of Making It Media and Executive Producer and Host of Staycation. “I’m delighted for our team and for Staycation to be recognized with an Emmy Award as we keep reinventing the content of travel destinations.”

“Staycation” presents local hotspots where travelers can enjoy a unique holiday experience. The destinations highlighted on the show range from luxury vacation homes in Palm Springs to cabin retreats in Big Bear and Lake Tahoe to ocean view homes in San Diego and Costa Rica. Staycation is hosted and co-hosted by Parks-Valletta Sean Breuner, CEO of AvantStay.

The show was broadcast on several broadcasters and CBS subsidiaries in regional. broadcast California, internationally on Roku TV, and was distributed to more than 5 million followers through Making It Media’s social media partner network. More episodes will be broadcast in 2021.

Staycation takes audiences on a journey to explore vacation rentals that go beyond typical travel destinations and accommodations, “said Marvin Nuecklaus, Director of Staycation.” By highlighting unique locations and homeowner stories, we give viewers and Travelers access to unique travel experiences and local cultures. “

Previously, Making It Media produced two successful travel television series in Wonderful Places and Destination LA, both of which are available on Amazon Prime. Organized by Crystal lee, In-arena host of the Golden State Warriors and former Miss California, Destination LA highlights local businesses and shares the stories of the people who built them. Destination LA is expanding to additional locations, with Destination Dallas airing in 2021.

ABOUT MAKING IT MEDIA

Making It Media (MIM) is a production company with a mission to create the travel channel of the future. Founded by Robert Parks-Valletta in collaboration with Emmy Award winning actor In it Brooks (The Bold & the Beautiful, Days of Our Life) and Dante Basco (Avatar: The Last Airbender, A Million Little Things). The team has created a total of 3,000 episodes of network TV content to date. Making It Media’s content expertise is complemented by a cross-platform sales approach with its combined social media partner networks with over 20 million followers and plans to launch the Destination Network, a 24/7 streaming channel that lives on multiple platforms.