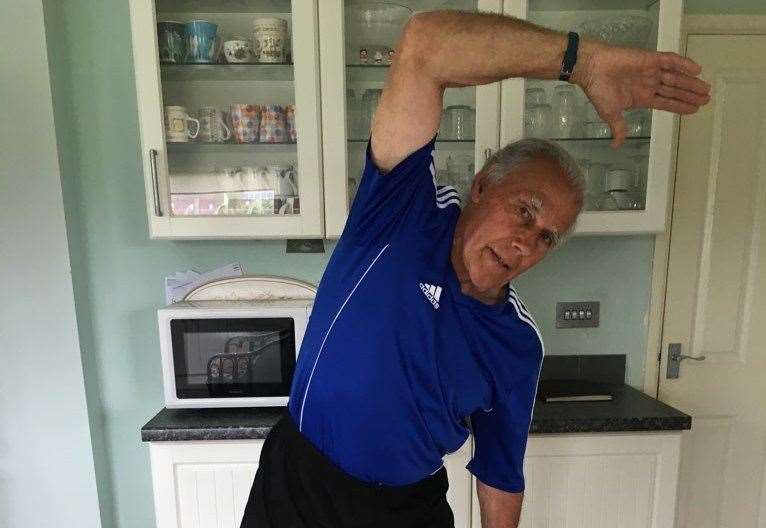 Throughout the coronavirus pandemic, he’s been giving his fans a reason to smile, keep fit, and improve their mental health.

But now Newbury’s “very own Joe Wicks” – as one of his supporters described him – says that he’s glad to be teaching his free fitness classes in person again after more than 12 months through Zoom.

Former St. Bartholomew School Physical Education teacher Mike Hart has been running his popular classes since 1971 and has a huge following.

The 73-year-old was scheduled to celebrate the 50th anniversary of his fitness class in March, but the pandemic somewhat thwarted those plans.

Suddenly his classroom courses, which he normally leads from the sports field in St. Barts, were canceled.

Undeterred, Mr. Hart set up virtual classes through Zoom with the help of his daughter Katie, who “takes care of the technical side of things” from her home in Dubai.

Since then, he has managed to offer three courses each week, attended by around 35 people, all of whom are over 60 years old.

Mr. Hart, who ran the St. Bart’s sports division and was the head of Curnock House, told Newbury Weekly News, “A lot of people have said it was a great help – not just physically but mentally – during the pandemic. They said it gives them some routine and something to look forward to.

“I’m not that big of an online person. I hate computers to be honest, and I probably wouldn’t have done it if my daughter hadn’t said, ‘Dad, I do all technical things’. She just sends me the link three times per week and hosts the whole thing from Dubai.

“It’s nice because it means I can see her too. I haven’t seen her in person since December 2019 because of the pandemic and we miss her terribly. “

During the lockdown, he grew and sold tomato plants and raised more than £ 1,000 to help NCC buy PPE equipment for the volunteer drivers who bring people with cancer to a number of local hospitals.

He said, “I have an active life. I spend three afternoons teaching at Thorngrove School in Highclere, and I have an assignment too. I like to be busy. “

Mr. Hart, who has lived in Newbury since 1969 after moving to the city from Cambridge, still offers virtual classes three times a week and in person two days a week at St. Bart’s.

He said it was “nice” to go back to teaching in person, but joked that in the first session at the time, he “couldn’t get anyone to do anything because they were too busy talking, because they were like that hadn’t seen in a long time “.